I had my first period at the age of 12, and today, as I sense  menopause peeping from round the corner, I remember a statement made by a professor way back in college:

“Celebrate menstruation! It is what makes you a woman!”

Golden words, those, considering, we women hate this thing we would like to think of as  an affliction! When I first learnt about it, I wondered if only women in our country suffered from it! Hilarious, I know, but in my day and  age, innocence still existed.

With no Internet to enlighten us with information, we were too naive to understand life and its ways.  Discussing such taboo topics with elders was considered to be strict no-no. Mother did advice me on what I was supposed to do if something “went wrong” in her absence. But, Dad was not to be consulted as he had no knowledge about anything of the sort!

I would often wonder when I would be rid of this monthly trauma, and so once  badgered mother to tell me when I would become a free bird.  She muffled a laugh, wrapped me in her arms and enlightened me  that my periods would be my companion for more than half of my lifetime! I almost fainted.

Mother would recount tales of how  women from olden days were treated  during those few days  of the month. They would have to stay in an outhouse, or some dark and dingy room all by themselves and their plates of food would be pushed towards them through the door left ajar for such tasks, lest they “touched” someone and contaminated them.

They were forbidden from entering temples and kitchens, for they were impure. And if by mistake they did brush past someone, then that person had to have an immediate bath!  I was aghast at that piece of news!

I also found out how certain practices  existed when I was young. Maybe they do so now, too! Maybe the way it is considered a taboo and has laws pertaining to behaviour during those days,is the reason why it  is looked down upon as an exasperating issue  rather than just another bodily function.

Some years ago, mother had invited some guests at her place and some religious rituals also had to be performed. I was on my period precisely at that time, but I decided to keep mum about it and help mother, lest all the work fell on her shoulders. As I went about completing the chores, I wondered why God, who created us, would consider His children to be impure because of something He Himself had blessed them with!

How could our God be so petty?

I confessed to mother a few days later fearing the worst. But, mother was a lot more progressive in her views than I gave her credit for and accepted my views proudly! I wish every mother would be like mine.
I  know that I am hurting sentiments by saying such things; I am aware how strongly some people feel about it the issue.

I have also read about some “scientific reasons” behind these so called laws. However, treating periods as a natural physiological occurrence, like urinating or sweating, would be a lot more sensible, isn’t it?

Also, discussing it with girls, as well as boys, when they come of age, and making them aware of the various eco-friendly products that can be used during periods, would help create the awareness it so deserves. Doing away with age-old laws and  assuming a  more progressive outlook will help the  Naari lead a better and a happier life. 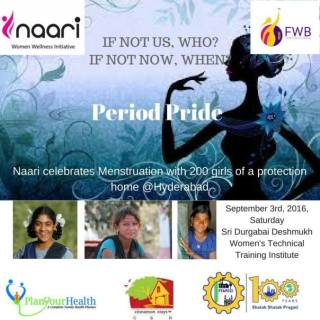 Do you know the secret to living a happy life? Eat. Pray. Love. Or, watch what you eat, wish well for all and fill your heart with love! That's precisely what I try to do through my blogs: 'Metanoia', the wellness website, and 'The S Word', my blog for essays on life. Welcome to my virtual homes! View all posts by writershilpa

14 thoughts on “Why whisper, when you can be carefree? #Period Pride”

Hi! I am Shilpa, the quintessential Gemini living in the city of dreams, Mumbai. Writing was a secret fantasy that became a reality with this blog. When I am not busy writing, my books and my art keep me company. My writing partners are my pets who offer me precious insights into Life and are a constant source of inspiration to me.
So, do get comfy, grab a cup of coffee and enjoy your visit. Your presence here means a lot to me, you know?

It takes a lot of patience and effort to put up with those who test your patience! ⠀ ⠀ Maybe we ought to regard them as our teachers. Maybe then we will actually learn a lot more!⠀ ⠀ #mondaythoughts #MondayMotivation #monday #mornings #morningsareforreflections #quotes #QOTD #thoughts #reflection #WordsOfWisdom
We need to learn to say NO.⠀ ⠀ NO to every negative thought that threatens to drive away our peace of mind. ⠀ ⠀ NO to the self-doubt that creeps in, unannounced, and forces us to question our capabilities, even when we know we CAN.⠀ ⠀ NO to the nay-sayers, who give a hundred reasons why we "must not do it."⠀ ⠀ NO to our fears and anxieties that hinder our progress on our path to self-realization. ⠀ ⠀ Just say NO, and go, follow your dreams, work towards fulfilling your wishes in spite of everything. Because you have but one life to do what you want to!⠀ ⠀ This time that's gone, won't return, ever. ⠀ ⠀ ⠀ #SaturdayThoughts #SaturdayMorning #SaturdayMotivation #quotes #fears #anxieties #learntosayno #believeinyourself #selflove #selfmotivation #followyourdreams #saturdayvibes
✳RAGI PORRIDGE MADE FROM RAGI MALT. Ragi, or finger millets, is a store house of nutritients. Calcium, iron, vitamins C, D and vitamins B1 and B3, and some important amino acids fulfil your body's needs with the goodness of this chocolate-coloured, nutty flavoured meal. It's simple to make at home. RAGI MALT can be prepared at home and should be made a part of your daily diet. Do check out Metanoia for a detailed post on: ✔How to prepare ragi malt at home. ✔Recipes for ragi porridge - sweet and savoury. ⏩Click on the link in my bio. ⏩Scroll down to the FOOD AND NUTRITION category and click on it. You will find the post on RAGI MALT. 😊💟 Do try it out and reap the benefits of this simple foodstuff. #wellness #nutrition #ragimalt #ragiporridge #homemade #recipes #health #foodtips #healthyrecipes #easyrecipes #homecooked #vegetarian #foodstagram #instafood #ontheblog #wellnessblogger
Chikoo came into our life when we were not even thinking of getting home a pet. Along with him, he brought happiness--loads of happiness--that stays on even today, 3 years since he left us. I sense his presence everyday. In the quiet of the night, or day, when I hear a sound, it only brings Chikoo to mind. He must be there, somewhere around, looking after me. It's not for no reason that my eyes tear up even as I type these words! Gratitude to the Universe for blessing us with such a loving, caring being. For the immense happiness he filled our world with. Love you always! Wait for me, Chikoo! 😘😘💟 #gratitude #happiness #dogs #petdog #ilovedogs #doggylove #family #love #laughter #blessings #life #soulmates
Last month, I read two books simultaneously. Both belonged to different genres. One was a memoir and the other was on skin and hair care. It was fun, though, reading two vastly different books side by side. I also found I could read more than one book at a time and not get hassled. This month, too, I am reading two books. Both are, again, completely different from each other: fiction and non-fiction. And I am loving it! The Kindle one (fiction) during the day and the paperback at night, after screen time is off limits. What about you? How many books do you read at a time? #books #booksofinstagram #booklover #bibliophile #bookish #fiction #nonfiction #instabooks
#tuesdaytipswithshilpa ✳NO-CHEMICAL HAIR CLEANSER.⠀ ⠀ Branded hair cleansers, or shampoos, make for convenient haircare regimen. But over a period of time, it affects our hair and scalp health. ⠀ ⠀ So, why not switch to homemade hair cleansers that are natural, eco-friendly and cheaper?⠀ ⠀ 🌿SHIKAKAI makes for the perfect hair cleanser. It's also a good tonic for hair health and fights dandruff. What's more, it's been used by our grandmothers and has their seal.of approval!⠀ ⠀ 🌿SOAPNUTS clean and condition the hair, making it easy to manage. They help get rid of oil and grease and give you smooth, shiny hair.⠀ ⠀ 🌿AMLA or Indian Gooseberry is loaded with vitamin C and antioxidants that improve the hair health. ⠀ ⠀ 🌿Mixed together, you get a chemical-free, homemade shampoo that is definitely going to improve your overall hair and scalp health if used on a regular basis. ⠀ ⠀ 🚩RECIPE⠀ ⚃Soak 5 to 6 shikakai beans and a couple of soapnuts overnight. ⠀ ⚃Next morning, chop an amla and add it to shikakai and soapnuts.⠀ ⚃Cook in a pressure cooker for 2 or 3 whistles. ⠀ ⚃Allow to cool.⠀ ⚃Mash well with hand and take the pulp. ⠀ ⚃Add some water to the mixture, mash it all again and add that to the first pulp. ⠀ ⚃Keep adding water and removing the pulp for a few times.⠀ ⚃Store all the pulp in a bottle.⠀ ⚃Squeeze a lemon to this solution.⠀ ⚃Refrigerate it.⠀ ⠀ ✔Use a bowl of this solution twice a week to wash your hair.⠀ ✔Do not forget to oil the hair before a hair wash.⠀ ✔If you feel your hair is already too greasy or dirty, don't apply oil. Just wash your hair with this solution.⠀ ⠀ 👍Watch the difference in 2 to 3 washes.⠀ 👌Your hair will be softer. ⠀ The dandruff and itchiness will be gone. ⠀ ✌The hair will feel healthier.⠀ ⠀ Do try it out.⠀ ⠀ ⠀ ⠀ ⠀ ⠀ #wellness #lifestyle #haircare #nochemicals #naturalingredients #haircleansers #hair #shampoo #hairfall #dandruff #itchyscalp #hairhealth #ecofriendly #sustainableliving