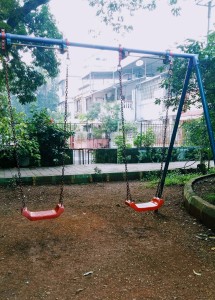 The park looked deserted, save for a couple of kids playing on the jungle gym. I made my way to the swing and  sat on its faded, red, plastic seat, gingerly.  Holding the thick  rusty chains of the swing, I gave myself a slight push and the swing began swaying, back and fro.  And, just like that, the moment whisked  me back to many years ago, when the park was my favourite place in the whole world.

I remembered those mornings, from eons ago, when I would slip out of the house in my school uniform and head for the park.  When I would stand on the swing and sway as high as I could, to feel the wind in my hair, and that glorious exhilaration of almost flying like a bird. When mother would come looking for me at the park and berate me for being such an irresponsible little girl. When I would leave the swing dejectedly to go home and head for school. When school was really not my favourite place in the whole world.

I looked around me and took in the changes the park had undergone in all these years. There were a lot more trees around, and the park  seemed to be well taken care of. But, the warmth and the love the place exuded was still the same. Untouched by time. The realisation  warmed me and I felt like a little girl, all over again.

I pushed myself a bit more now and the swing began swaying higher. I stretched my legs in front of me, and holding the chains tighter now, leaned back and turned my face skywards. A little patch of the light blue sky peeped through the canopy of lush green trees. And, in that little blue patch I saw a swarm of dragonflies hovering above me, as if wondering who this new visitor might be!

I felt caught in a moment I did not want to end. A moment from the past when life was all about playing in the park even after the sun had long set; about friends who made promises of being together forever; about studies that were most hated and yet not a burden, but mostly about laughter, happiness, joy – unbridled joy.

I stayed  on the swing long after it had stopped swaying. The sun had touched the horizon and was biding adieu for the day. The weather had turned muggy and the dainty dragonflies had now been replaced by the humming mosquitoes. I looked around me at the now deserted park and felt myself unable to move. Was I really unable to move, or was it that I just did not want to  move?

Why, oh why, did I have to leave this place, this moment,  and go back to the adult world where I did not have any such place that was my most favourite place in the whole world? Yes, I did have my home – my cocoon – but then, why did I feel so safe here, in the deserted park, with not a soul around?

Maybe it was the memories the park held, the sound of laughter that still echoed there even after all these years, the carefree atmosphere it held within its bosom – that was what seemed to keep me rooted to the spot. That was what I most yearned for in my present life – the warmth, the coziness, the pure innocence of childhood. All of it that had gotten lost along with time. All of it that, despite being in the present, was not really the same.

No wonder then that it’s called the most precious period of life –  Childhood. Once it’s gone, it’s gone, never to return. However much ‘young at heart’ one stays, it is not  what it used to be!

Do you miss your childhood? Where do you look for it? Do share with me, I would love to know!

Linking this post to The WriteTribe ProBlogger October 2017 Blogging Challenge.

Do you know the secret to living a happy life? Eat. Pray. Love. Or, watch what you eat, wish well for all and fill your heart with love! That's precisely what I try to do through my blogs: 'Metanoia', the wellness blogazine, and 'The S Word', my blog for essays on life. Welcome to my virtual homes! View more posts

41 thoughts on “In search of my lost childhood. #writebravely”