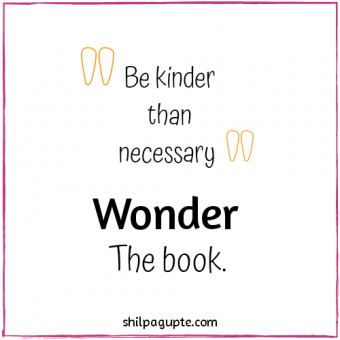 Wonder, the book by R. J. Palacio, is about Auggie–August Pullman–a fifth grader, who suffers from the Treacher Collins Syndrome. It’s a medical condition that has left his face disfigured. Having being homeschooled by his mother, Auggie now has to join the Beecher Middle School so as to experience the real world.

Auggie has an elder sister–Olivia– an extremely caring sister who understands that her brother needs all the attention of their parents, more than she does.

At the new school, there are children who are petrified by his face, but there are also some, like Summer, who look beyond the disfigurement, at a child who is not only adorable, but also very articulate and intelligent.

Wonder is Auggie’s story, of how, despite being so against joining a school, ends up enjoying school life, making new friends and winning everyone’s heart.

What I loved about the book:

Everything about the book just stole my heart! RIght from the first word, I fell in love with the story and with Auggie, as well as the other characters in the story.

His parents, who care about their son, put his insecurities about the school to rest and are open to his opting out of the school if he finds it uncomfortable. It can be such a tight rope walk for parents with children who need their constant attention due to some medical condition. Giving equal attention to their children can be a tough thing to achieve.  Auggie’s parents do their best to give their all to both their kids so that they bloom into beautiful individuals.

His sister, Olivia, or Via, as she is called, knows and understands how her brother needs all the attention because of his condition. A girl who treats her brother like a normal child and is, yet, very protective about him. It can be a really difficult situation, having a sibling with special needs and with the focus being on them, the other child is sure to feel left out. In spite of it, I liked how Via takes it all with a smile and learns from Life. The perfect little elder sister.

Auggie’s friends, especially Summer, a child whose caring heart never differentiates between Auggie and the other kids at school. She becomes his best friend right on the first day of school and could, actually, teach us adults a thing or two about accepting people as they are and not judging them on the basis of their appearance.

Oh, and Mr. Lawrence Tushman, the director at Beecher Prep. He welcomes Auggie into the school and makes sure he feels at ease in the new surroundings with the help of three of his classmates. We could do with more teachers like him–caring, understanding and with a clear conscience; whose only intention is to help mould their students into wonderful human beings.

And, how could I forget, Daisy–Auggie’s pet dog, who loves her human brother, but, sadly, dies in the story. Her death made me weep like I did when I lost my Chikoo.

There are some quotes in the story that grab our attention and urge us to look within and ask ourselves if we are being the kind of humans we were meant to be.

Courage. Kindness, Friendship. Character. These are the qualities that define us as human beings and propel us, on occasion, to greatness.

When given the choice between being right or being kind, choose kind.

Funny how sometimes you worry a lot about something and it turns out to be nothing.

It is not enough to be friendly. You have to be a friend.

And, this one, Auggie’s precept:

Everyone deserves a standing ovation because we all overcometh the world!

So, be kinder than is necessary, and remember to be a friend….a true friend.

I am sure you will love this book. Our children could do with such stories of kindness and courage in today’s world where appearances are given more importance and instant gratification is the way of life.

Next on my list is, to watch the film!

8 thoughts on “From my bookshelf, October’18 — The story of a little boy.”