Today is a big day for a dear friend of mine as well as for my blog. Today, it’s my absolute delight and honor to reveal the cover for Damyanti Biswas‘s debut crime novel, You Beneath Your Skin to be published this September by Simon & Schuster, India.

I met Damyanti last year, a couple of years after being an ardent admirer of her writing. It was her blog and her style of expressing her thoughts, and stories of real-life heroes, that instantly made me her fan. But it was only after meeting her that I realized I had found a friend for life!

So, without further ado, here’s the cover!

The red and black immediately captures nuances of an atmospheric crime story, isn’t it?  But, it’s the face visible under the title that’s sure to make you wonder who she is, and what her story might be.

It’s a dark, smog-choked New Delhi winter. Indian American single mother Anjali Morgan juggles her job as a psychiatrist with caring for her autistic teenage son. She is in a long-standing affair with ambitious Police Commissioner Jatin Bhatt – an irresistible attraction that could destroy both their lives.

Jatin’s home life is falling apart: his handsome and charming son is not all he appears to be, and his wife has too much on her plate to pay attention to either husband or son. But Jatin refuses to listen to anyone, not even the sister to whom he is deeply attached.

Across the city there is a crime spree: slum women found stuffed in trash bags, faces and bodies disfigured by acid. And as events spiral out of control Anjali is horrifyingly at the centre of it all.

In a sordid world of poverty, misogyny, and political corruption, Jatin must make some hard choices. But what he unearths is only the tip of the iceberg. Together with Anjali he must confront old wounds and uncover long-held secrets before it is too late.

If edge-of-the-seat suspense thrillers are your preferred genre, then do check out this book. It’s not just a crime story but also deals with certain social issues.

Pre-order YOU BENEATH YOUR SKIN here.

I received an advance copy of the book and here’s what I felt about it.

Being a crime-story fan, I loved the blurb and looked forward to the story. It did begin on a slow note, but picked up pace soon enough and, suffice to say, I was hooked!

Damyanti gives a clear picture about the city where the story is based, as also the characters. My heart went out to the central character, Anjali, who has to deal with life that’s difficult and demanding. Caring for a special-needs child and dealing with everyday life is a tough task, and to do it all with elan, I felt respect for Anjali, and concern, too.

The story also revolves around relationships between the characters, apart from the crime and that makes it all the more interesting.

As far as the other characters are concerned, I did feel in some places that a particular character could have been portrayed a bit differently. But when I looked at the story in its entirety, I realized that each character had been etched to perfection.

The crime does get grittier as you turn the pages, and it’s precisely this that keeps you going, wondering what lies ahead.

The end was a surprise element for me, as I was expecting something completely different. But, you ought to give it to the author for such a build-up that leaves you in shock from an unpredictable denouement! 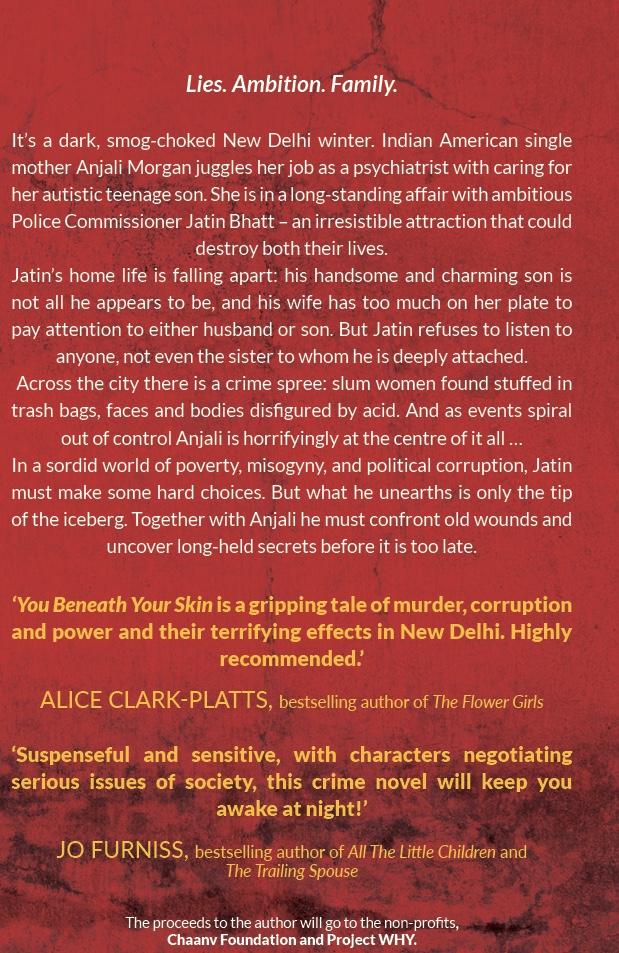 So, do you read crime novels? What do you think about the cover of this book?

Would you like to read You Beneath Your Skin and make a pre-order? You will not only be entertained by an engrossing story but will also be doing your bit towards the society.

For You Beneath Your Skin, all proceeds to the author would be divided between Chhanv Foundation and Project WHY.

To support the organisations, pre-order HERE.

Damyanti Biswas lives in Singapore and works with Delhi’s underprivileged children as part of Project Why, a charity that promotes education and social enhancement in underprivileged communities. Her short stories have been published in magazines in the US, UK, and Asia, and she helps edit the Forge Literary Magazine. You can find her on her blog and twitter.

4 thoughts on “You beneath your skin, by Damyanti Biswas. The Cover Reveal”